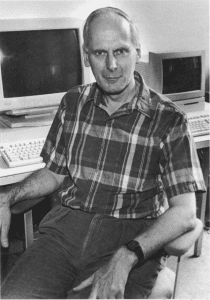 Dr J. Michael Boardman, Professor Emeritus of Johns Hopkins University, a leading expert in the field of mathematics known as homotopy theory, died of natural causes on March 18, 2021 at age 83.

“There is a lot of beauty in mathematics,” explained Boardman, who was born in Manchester, England. He discovered his love of mathematics early at Manchester Grammar School, then studied at Trinity College, Cambridge, earning his doctorate in 1964. Michael came to Johns Hopkins University in 1969 and helped establish the Department of Mathematics as one of the top departments in the nation specializing in homotopy theory, part of the larger field of topology.

Topology concerns the use of mathematics to study shapes; in homotopy, spaces themselves can be thought of as algebraic objects. Homotopy theory, and topology in general, have applications in a variety of fields, such as engineering, economics, and the study of DNA. Boardman’s pioneering work is credited with creating modern stable homotopy theory, and the Boardman-Vogt theories developed with Rainer N. Vogt are benchmark breakthroughs in the field. Boardman’s mathematical framework for understanding infinite loop spaces is foundational and has inspired other mathematicians in the field, as well as finding applications in other areas of mathematics. In 2012, Boardman was named an inaugural fellow of the American Mathematical Society to honor his influential work.

Boardman was known for his humility and kind nature. In 1998, the American Mathematical Society held a 4-day Special Session on Homotopy Theory in Boardman’s honor, bringing together experts from around the world to Baltimore to speak about his work and its influence. Boardman himself could be found staffing the information table at his own conference, helping guests with accommodations and local restaurants. His colleagues enjoyed his dry wit, which surfaced in his work; a lecture might reveal itself to be a long string of puns. He loved music as well as mathematics, and was a frequent concertgoer at the Baltimore Symphony Orchestra.

Throughout his career, Boardman appreciated the deep questions raised by the field of topology. “Once it is clear that the end is in sight, then people start drifting out of the subject because there is not much left to do,” Boardman said. “That’s not going to happen in topology. It’s never all done, nor is it going to be any time soon.”

Boardman was a long-standing member of Stony Run Quaker Meeting in Baltimore, Maryland, and an enthusiastic member of the Baltimore Camera Club. He is survived by his daughter, Susan Boardman of New York, New York, his son, Andrew Boardman of Wilmington, Massachusetts, and his sister, Barbara Barker of Worlaby, England.